How can we help?

This search facility will trawl through our site to find you exactly what you’re looking for. Search for courses, paths, blog content or more general information.

To search for jobs, please visit our recruitment section.

“Do seafarers pay tax?”, “What is a seafarers self-assessment tax return?”, and “What is the Seafarers Earnings Deduction”?

Whether you’re just starting out as a yachtie or have years of experience sailing on board superyachts, seafarers’ finance can be a tricky subject. You’re bound to have questions about your finances and taxes – but don’t worry, help is at hand!

In this blog, we’ve gathered together your most frequently asked finance questions, so you can have all the answers you need in one place. So, read on for answers to all of your yachtie finance queries…

Do seafarers need to pay tax?

Starting off with one of the most common questions we’re asked, the answer is no, there is no tax to be paid with regard to your income from employment at sea (providing you meet the criteria).

The Seafarers Earning Deduction is a piece of tax legislation that allows foreign earnings to be exempt from UK income tax – so you can claim 100% tax relief on the amount that you earn at sea if you are eligible.

What about national insurance?

Yes, seafarers do pay national insurance – although the payment of your NI contributions does depend on several factors, such as where you are legally a resident as well as where your vessel is registered to.

In addition, where you work will also be considered, along with your employer, their location, and the job you undertake. The location of the owner of the vessel will also be looked into, as will whether you work inside or outside of UK waters.

Finally, any agreements between the United Kingdom and other countries will also be considered as well. See, we told you seafaring finance was complicated!

So, what is the Seafarers Earnings Deduction?

As we said above, the Seafarers Earnings Deduction is a tax legislation which can enable seafarers to claim 100% tax relief on the amount they earn.

After years of battles between trade unions and HMRC, the legislation came into effect in 2012, essentially because seafarers spend so much time at sea, they don’t benefit from services that income tax helps the government pay for, such as the NHS, education, and infrastructure.

Sadly, though, many seafarers and superyacht crew still don’t use the SED exemption – most likely due to a lack of education about whether or not they can – and are missing out on their earnings because of it.

How do I know if I qualify?

The three basic rules to qualify for SED are that you must have worked outside the UK for 365 days, your qualifying period has at least one voyage that begins and ends at a foreign port, and that you work on a ship. Here’s an explanation of the qualifying criteria in more detail:

1. You’ve worked outside the UK for the qualifying period

To qualify for SED, you must have worked outside the UK for a period of 365 days. As soon as this 365-day period has been attained and confirmed, it is carried on until there is a ‘failure’.

A failure occurs if at any time during the claim you spend 183 days or more in the UK or break the ‘half-day rule’.

2. Each qualifying period has at least one voyage that begins and ends at a foreign port

Crown employees are also not eligible to claim SED unless they are employees of the Royal Fleet Auxiliary.

What is defined as outside the UK for SED?

Under typical circumstances, HMRC looks at being outside the 12-mile limit as being outside of the United Kingdom. However, they will accept that where a vessel leaves its UK berth before midnight and go to a foreign port – that is seen as a day out.

I am a resident outside of the UK – can I claim the seafaring allowance?

If you are not a resident in the UK but are resident in an EEA State, you may be entitled to claim Seafarers Earning Deduction due to changes made from the 2011-12 tax year.

In order to do so, you must complete a R43M form rather than a tax return. If you are a non-UK and non-EEA resident seafarer but pay tax to HMRC, you may be able to claim the tax back too.

Does dry-docking of a vessel affect a claim?

Unfortunately, yes, it’s possible for a ship in a dry dock to be seen as not being a ship for tax purposes by HMRC. When a vessel is in a dry dock, it can still be regarded as a vessel.

However, if the hull of the vessel is breached, it then ceases to be a ship – so it’s vital to keep HMRC informed if your ship is operating under those kinds of circumstances.

How many days’ holiday can be included in my claim?

As many as you want! There isn’t a set limit; all that matters is the number of days spent away from the UK.

Are there time limits for claiming Seafarers Earnings Deduction?

What is the seafarer’s self-assessment tax return, then?

Self assessment is one of the systems that HMRC uses to collect income tax. Tax is usually deducted automatically from wages, pensions, and savings, but if you are self-employed, you need to complete a tax return each year and HMRC will then calculate the amount of tax you owe.

How do I complete it?

If you are a UK resident with 365 days of qualifying work on a ship, the first thing you need to do is register for your self assessment tax return.

In order to complete your seafarers tax return and claim your Seafarers Earning Deduction, you will also need a combination of the following records:

What is a working sheet HS205?

An HS205 form is simply the name of the form you will need to fill in in order to claim SED. You can find the form on the government website.

When do I need to complete my tax return by?

The time limit for submitting a tax return is the 31st of January following the previous 5th April, which gives you nine months to complete and submit the return. In order to guarantee that your return can be submitted in time, it is advised that you send all the details for your return by mid-December.

What happens if I don’t complete it?

Unfortunately, you can face significant penalties and financial repercussions if you don’t complete your form correctly or on time.

If you submit your tax return up to three months late, you’ll have to pay a fine of £100 – even if your SED exemption means you shouldn’t have any tax to pay.

After three months, HMRC can then impose an additional £10 fine for each extra day that you don’t submit your return for up to 90 days – which means you could end up with an additional £900 bill on top of your initial fine.

If you still don’t submit your return after this, you’ll be looking at even bigger fines. Essentially, the longer you leave it, the worse the penalties become – so make sure you complete your seafarer’s tax return and file it on time!

Should I use a tax specialist?

Not completing your tax return or doing so incorrectly will come back to bite you sometime in your life. Instead of paying nothing, you may have to pay the full income tax of your earnings and potentially a fine on top – so if you’re unsure, it’s always best to use a tax specialist to help you out.

Here at Flying Fish, we run a seafarers tax service for all UK crew. For £210 per year, we will complete your tax return and make sure it is done correctly so you pay no unnecessary income tax, which will save you so much money, time and stress.

Want to find out more about how we can help? Simply contact our team today and let us take care of your tax worries for you! 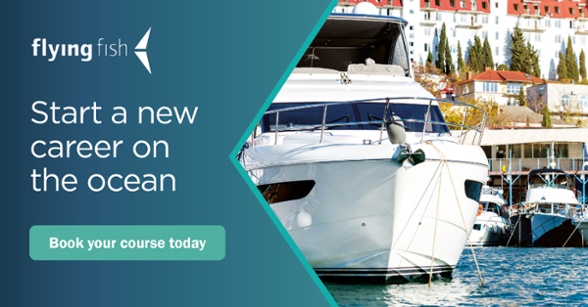 Based on 170 Google reviews. Read our reviews.